Originally created as a general sport club for the Hungarian Union of Iron Workers, Vas-és Fémmunkások Sport Clubja (Sport Club of the Iron and Steel Workers) was founded on the 16th March 1911. Renamed several times between 1943 and 1957, the club has, since then, operated under the much shorter, but still meaningful, name of Vasas SC.

As a club, Vasas’ primary role was to provide the infrastructure to allow and encourage the tens of thousands of workers of the iron and steel industry in Budapest to spend their free time playing sports. With several departments spanning a range of different activities, Vasas SC became a force in several sports such as athletics, boxing, chess, fencing, football, handball, tennis, volleyball, and not least water polo. Many an Olympic champion has passed through the Vasas ranks on their way to success, and no doubt that will continue as long as the club exists.

Most of the club’s facilities were, and still are, based on Fáy utca in Angyalföld, in the 13th District of Budapest. Needless to say, as a club for such a tight-knit community, there was already a family overtone amongst its members from the very start. The club motto, A család az első (Meaning ‘the family comes first’), built upon that and has become almost an ethical code for members and fans alike. This is what separates the club from many others. Regardless of how badly one might be chasing success, one must always remember the collective greater good in their endeavors, and never forget the family to which they belong. Not achieving success isn’t regarded as failure, but forgetting where you come from is. Nowhere is this more evident than during football matches at the Illovszky Rudolf Stadion. Regardless of the score line or outcome of a match, every supporter, to a man, sees it as their job to show encouragement to their beloved team rather than put down the opposition. Even the Armata, the Vasas ultras, take on the role of conductors of encouragement during matches via a megaphone and an incredible amount of enthusiasm and passion for the betterment of their club.

The club’s football department has achieved varying success throughout the past 100 years. Nicknamed the piros–kék (the Red/blues) because of their club crest and strips, the colours have become synonymous with the identity of Vasas. Playing at the Illovszky Rudolf Stadion (named after the late, great, Rudolf Illovszky, icon of Vasas.) the team saw their golden era during the period between the mid-to-late 1950’s, and the late 1960’s. The highlights being their dominance of the Mitropa Cup during the 1950’s and 1960’s, and reaching the European Cup Semi-finals in the 1957-58 season, losing to eventual champions Real Madrid over two legs. Exactly a decade later they again reached the Quarter-finals only to lose over two legs to eventual finalists Benfica. 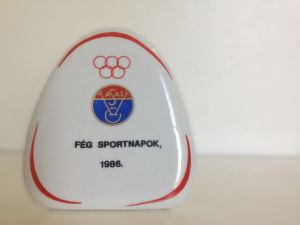 Since then, success has been fleeting in nature. Runner up in the Hungarian Cup in 1999/00 and again in 2005/06, the club has failed to build on these good cup showings by matching them in the league. The 2001/02 season saw Vasas relegated, meaning they didn’t take part in top flight football for the first time since the 1941-42 season. Again in 2005/06 season, the club finished 15th and would have been relegated but for Ferencváros being relegated instead as a result of financial irregularities.

Now, with the club having celebrated its centenary just last year, and still coming to terms with being back under its own control after a short takeover by Híd Akvizíciós, Vasas once again find themselves in NB II. With finances tight, and emphasis being placed more and more on players coming through their excellent academy, the ever-optimistic Vasas fans are hoping that a change of manager and big change in playing staff can help them quickly climb back to the dizzy heights of the NB I.

However, regardless of which division Vasas play in, one thing will always be true. A család az első.