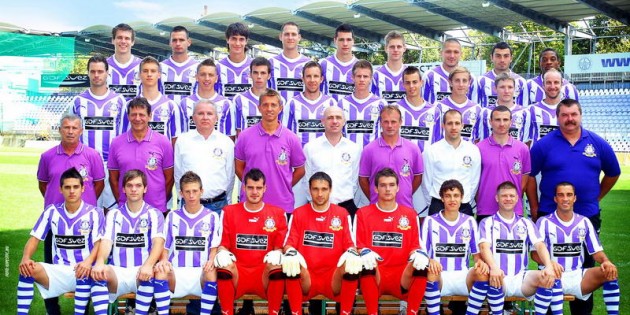 Player to Watch – Yadin Zaris signed on a season long loan from Maccabi Herzliya and scored 11 goals for them as they finished 3rd in the Israeli NBII last season. The 22 year old Israeli striker netted twice for Lilák in pre-season against Sint Truiden & Antwerp.

Rising Stars – Litauszki Róbert – the Hungarian u21 defender made a few appearances last term and could become a fixture if given the opportunity.  In an attacking sense look out for the two young wingers – Kovacs Dani came back from injury at the end of last season and has impressed in pre-season; Simon Krisztian, a year younger at just 21, was tipped to be a big star but has struggled with a succession of foot injuries in the last year, a future full international if he gets back to fitness.

Realistic Target – New owners have settled most of the financial issues left by previous incumbents and stabilized the club. The new head coach has made a couple of astute signings to add to what was a decent (but underperforming) squad and with no-one of much significance leaving Újpest could be on the up. Of course you never know if all of that is going to bed in effectively, so they could finish anywhere between 4th and 14th, I’ll plump for something at the positive end of that range.

Újpest FC, first known as Újpesti Torna Egylet (UTE) was founded on 16th June 1885, Újpest was at that time a separate city just next to the borders of Budapest but it is now Budapest District IV. From 1950 until the Hungarian Revolution the club was known as Budapesti Dózsa and then after that until 1991 Újpesti Dózsa. UTE was formed first as a general athletic club and to this day still has sections hosting a large number of different sports. Having won the league championship 20 times and the cup on 8 occasions, they are one of the most successful clubs in the country and they are the oldest still in existence.

Újpest are nicknamed Lilák as the club colours are purple/white and they play at the Szusza Ferenc Stadion. Originally called Megyeri úti stadion it was designed by Hajós Alfréd, the first ever swimming gold medallist in the modern Olympic Games, and opened on 17 September 1922; in that first match Újpest beat Ferencváros 2-1.

With a capacity of up to 50,000 it was the biggest football ground in Hungary until completion of the Népstadion (Puskás Ferenc Stadion.) After renovations in 2000/2001 and conversion to all-seater the ground can hold 13,501 spectators. The stadium was re-named in 2003 in honour of Szusza Ferenc, one of the best strikers in Hungarian football hstory who scored 392 goals in 463 games for the club.

The 1930’s was the first great era for Újpest with 5 league titles and they also provided 5 players for the Hungary team which was runner-up in the 1938 World Cup. This success continued immediately after World War II with 3 successive championship wins and a club record of winning 30 consecutive games was also set during this period.

In 1950 the communist government decided Újpest would be the club of the police and renamed them. Such clubs in other communist countries were named Dinamo but Hungarian character stood strong and insisted that only Dózsa would be acceptable so Budapesti Dózsa (after Dózsa György a 16th century peasant leader) was the new name, the D on the badge though was identical to that worn by all those other teams. During the 1956 revolution the club renamed itself Újpesti TE, however after the revolution was quashed by the Soviets, the Hungarian government would not let the club use their old name so they became Újpesti Dózsa.

This name presided over the greatest period in the club’s history as after a 13 year gap Újpest became champions of Hungary in 1959–60 and then started to make their mark on the European stage.

The club made it as far as the final of the UEFA Inter-Cities Fairs Cup in 1969 losing to Newcastle.

Probably Újpest’s greatest feat in Europe was getting to the European Cup semi-final in 1974 and this was after two consecutive quarter-final appearances in 1972 and 1973.

Domestically Újpest won the league in all seven seasons from 1969 to 1975 and lost only 4 home matches in 10 seasons. The club also won the Magyar Kupa 3 times during the same period and 2 more league titles followed in 1978 and 1979.

During the 1980’s the league title became elusive but there were three more Magyar Kupa wins to add to the tally.

After the fall of communism, the club changed their name back to Újpesti TE and marked the change by immediately winning the league in 1990, but after another Magyar Kupa win in 1992 they entered a barren period. To date their last Hungarian league title was in 1998, after which the club name reverted to Újpest FC, and the last Magyar Kupa win was in 2002.

More recently Újpest has been league runner-up in 2004, 2006 & 2009; the middle one of those being a massive collapse at the end of the 2006 season when a win in any of the last three matches would have seen the league title won.

Last season was an interesting one for the club as many experienced players had departed, Mészöly Géza made a couple of successful loan signings but in the main concentrated on bringing through the young players. As could be expected their inexperience also brought inconsistency but after a shaky mid-season there was an impressive end and Újpest finished strongly in 6th place.

It is a real credit to the club that in the Hungary u-21 squad announced during the summer Újpest have no less than eight representatives; six who played in the last league match on Sunday and the injured Lázár Bence plus Simon Krisztián on loan at Feyenoord.

Hopes are high for the new 2011/12 season as those young players have matured a lot with last season’s appearances plus the additions to the squad of Kabát Péter and Fehér Csaba will add some experience to the spine of the team. This coupled with the signing of the potentially exciting Darko Marković gives Lilák a lot of optimism for the new season.