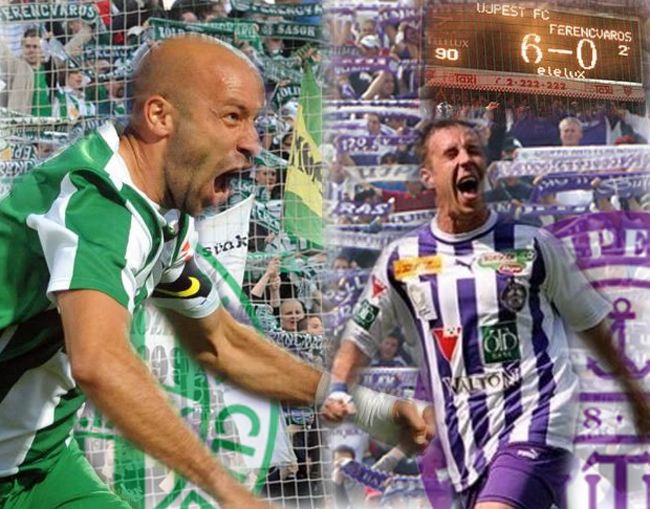 What has turned a simple match between 2 teams of Budapest’s 2 far-away districts (Ferencváros, nicknamed Fradi is in the 9th district, while Újpest is in the 4th district of Budapest) into such a big rivalry that it is now according to World Soccer’s compilation a more important derby than the clash between the 2 London giants Arsenal and Tottenham (42)? Why have they emerged as the 2 most popular teams from the many Budapest clubs and what is the socio-economic, historical background for their bitter rivalry?

Ferencváros and Újpest are among the oldest football clubs in Hungary. Nevertheless, we cannot state that the rivalry goes back until the birth of the modern Hungarian football at the end of the 19th century when both Ferencváros (1899) and Újpest (1885) was founded. The greatest arch-rivals back then were Ferencváros and MTK (established in 1888). MTK dominated the Hungarian championship with its 9 consecutive victories between 1916 and 1925. It was an intimidating force. Every other club wanted to defeat them.

It can be seen that because of MTK’s dominance the identity of Ferencváros was developed in contrast with MTK’s. Although both clubs were founded by representatives of assimilated Hungarian minorities (respectively German and Jewish), the fact that MTK didn’t belong to a specific district and stressed its universal character from the beginning while Ferencváros always belonged to an easily identifiable, limited area lead to Ferencváros becoming more local patriotic in its nature. The local patriotic supporters of Ferencváros were mostly blue-collar workers and poor people from the 9th district while MTK was the downtown club of the bourgeoisie.

Due to the fact that clubs outside of Budapest couldn’t compete with the more powerful Budapest-based teams during the 1920s and 1930s (Hungarian football was so strongly Budapest-centered that the 1st non-Budapest team ever to win the Hungarian championship was Gyori ETO in 1982!) the bulk of poor people (agrarian and industrial workers) outside of Budapest became fans of Ferencváros thus making the club the most popular Hungarian team by the beginning of the 2nd World War.

Újpest in these days wasn’t officially part of Budapest (it became a district only in 1950!). It was just a poor suburban town with much more limited financial opportunities than Ferencváros. This explains partially why it didn’t become as popular as Ferencváros in spite of being a team of the Hungarian workers too. Those non-Budapest workers who were looking for a team that firstly was a so-called ‘team of the working class’ and secondly could have stood a chance against MTK were solely able to choose Ferencváros because Újpest was too weak yet to become a championship contender.(Újpest won its first championship in 1930 but was not really a force next to MTK and Ferencváros.) Nevertheless, Újpest’s popularity slowly but steadily had been increasing but it had mainly remained a local club while Ferencváros had been gaining support all over the country.

A typical Ferencváros supporter defined himself (or extremely rarely herself) as an ‘ordinary, honest Hungarian’ who lives from the work of his own bare hands. Becoming a Ferencváros fan meant becoming an anti-MTK fan thus becoming ‘anti-establishment’ and so in a way silently (or during a match not so silently) rebelling against the dictatorship of the Hungarian ruling class.

The major ‘anti-establishment’ force in the 1930s was the Hungarian extreme right-wing Arrow Cross Party and the popularity and perceived philistine character of Ferencváros led to the club being brutally taken over by the Party and the Nazi collaborator Arrow Cross government during the dark days of the German occupation in 1944. The other popular club which was controlled directly by the Arrow Cross government was Újpest (named Gamma). It was no accident that the 2 most popular clubs shared the same, sad fate. MTK as the embodiment of the previous, conservative-bourgeois regime was considered ‘undesirable’ and was disbanded by the authorities.

The fact that Ferencváros and Újpest were the 2 major teams that were quickly taken over and run directly by Nazi officials after the German army had invaded Hungary is a sign that already in the early 1940s these were the 2 most popular clubs in Hungary. MTK (even after its revival) never ever regained its popularity and influence that it had been enjoying before World War 2.

The direct control of Hungarian football teams continued after the Communist Party ‘won’ a rigged election in 1948 and established a cruel, totalitarian regime. Ferencváros became even more the club of the Communist system’s opposition than ever before; soon it was labeled as the ‘Hungarian people’s club’. The Communist authority feared it so much that the club had to change its name and even its colours. MTK suffered the same fate. Hungary’s 2 prime football teams did not exist in name and colour for a short time.

The government singled out its favourite teams and these teams had one thing in common – in order to lose their former local patriotic edge, they were ordered under the control of a ministry. Honvéd was the system’s most privileged team and it was the army’s team under the authority of the Ministry of the People’s Army. Hungarian football lived its golden era in the first half of the 1950s and for a couple of years Honvéd became the best football team in the world due to the fact that the greatest Hungarian players (Puskás, Czibor, Kocsis, Bozsik) were transferred to the club.

The other favourite was Vasas, the team of the trade unions that informally were independent but in reality under the harsh supervision of the Communist Party. The 3rd favourite became Újpest which was renamed Újpesti Dozsa meaning that it was now under the control of the Ministry of Home Affairs thus earning Újpest the sobriquet ‘team of the police’. Dozsa was the strongest team in Hungary after the great players of Honvéd defected to Western European countries in the aftermath of the Hungarian revolution in 1956.

The formula was similar to the one before the 2nd World War, Ferencváros (together with MTK) got back its name after 1956 and remained the most popular team considered widely as ‘anti-establishment’ or ‘anti-Communist’ or ‘the only Hungarian club’, while Újpest was the team under the control of the Ministry of Home Affairs which received the most state donation and owned the best players. It came as no big surprise then that Újpest managed to win 7 consecutive Hungarian championships during the 70s.

The real difference in comparison to the situation before the 2nd World War was that while MTK didn’t really have a strong supporter base, Újpest was – and most likely still is – the 2nd most popular football team in Hungary. The reasons for this popularity are the reasons why the Communist regime chose Újpest as its new favourite team after 1956.

Újpest is a large (larger than Ferencváros) industrial district of Northern Budapest where the blue-collar workers felt always more sympathetic towards the Communist party than the average Hungarian people. The popularity of football teams in large industrial towns increased also dramatically during this era. The original local affections were transformed into social affections: Újpest became the football team of the workers; Ferencváros was the Hungarian people’s team which usually meant the ‘football team which is not under the influence of the Communist party’.

This Communist opposition club dichotomy became the source for sport rivalry of the 2 teams and unfortunately much too often a ground for the real confrontations of the 2 fan bases. As time went by, the political reasons behind the clashes faded mostly into obscurity. After the end of the Communist system in 1989, the rivalry lost completely its political character and the Ministry of Home Affairs finished sponsoring Újpest from the state budget and the team regained its old name.

All that remains nowadays are the usual scandalous fights between the fans of Ferencváros and Újpest and while fortunately the political reasons for their rivalry are long gone, unfortunately the world-class football both club played until the 80s is missing too.

2 thoughts on “Újpest vs Ferencváros, A background”