Well it looked all rosy on Wednesday afternoon didn’t it? Just after throwing away a 2-0 lead with 3 minutes remaining, Zoltan Farkas found himself unmarked at the back post to make it 3-2 and send the Hungarian Under 17s to their first European Championships since 2006.

Or so they thought. News broke last night that Belgium were appealing to UEFA over a Russian player named, Maksim Ermakov, who should have been suspended for the game vs Belgium, but played the full 80 minutes. Belgium had won the game 1-0, on appeal they were awarded a 3-0 victory to take them to the Euros, ahead of Hungary, on goal difference. Which seems insane. The ruling has punished Hungary who have done absolutely nothing wrong. 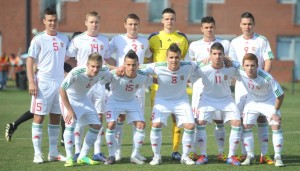 In the group they beat Wales 5-1, beat Russia 3-2 and drew to Belgium 2-2 (after throwing away a 2-1 lead with an extra man). But somehow they find themselves out of the tournament thanks to Russia (and UEFA).

It’s interesting to wonder what effect this will have on this group of players. The scenes were for all to be seen after the final whistle. The players were absolutely delighted, and why not? This was the biggest game they’ve ever played, and to win it in such circumstances against Russia of all nations to get to the first European Championships since 2006, it was a massive victory for the players, and the country in general.

But now this UEFA ruling hasn’t even given them a chance of going to Slovakia. Tournament football is vital to international success. It’s for all to be seen that teams who do well at youth tournaments, usually do well in a senior tournaments later down the line. And seeing as some people in Hungary are saying that this team “is better than the Under 20 World Cup bronze medalists”, that shows just how good they are – they could have won that tournament in May!

What else could have been done? Relatively little. Seeing as it was one player who was ineligible, how much impact did he really have on the game. Did he personally prevent Belgium scoring two goals? I doubt it. He also picked up a booking (sounds like a notorious villain), which wouldn’t have helped his team seeing as he plays in defence. Just punish Russia?

A playoff? Well surely that’s better than just booting one team out of the competition for another teams mistake. It’s not exactly hard to rearrange anyway. Not like you’re rearranging a World Cup.

The thing is, Hungary knew that if the beat Russia in the final group game, they would be through, it was almost as simple as that unless Belgium beat Wales 5-0 (they beat them 3-0). But had Hungary known about this ruling, then maybe they would have shut up shop when they were 2-0 up (seeing as that would have sent them through). But to send a team out after all the games have been played, when they have no chance at all to respond is ludicrous!

Hungary’s luck when it comes to tournaments continues.