Last night saw the latest round of games in the Hungarian league cup. A kind of competition that is up there with the first qualifying rounds of the FA cup, but with less interest. It is however a chance for the young and fringe players to show what they can do, all on live television.

The beauty of watching games in Budapest is that you can be at any ground within 20 minutes so last night, thanks to kick off times I managed to go and watch two games, firstly Honvéd and then Ferencváros.

As I left the metro station to take a tram to the ground in Kispest, the crowds made me wonder if there was actually going to be fans at the evenings game, but once on the tram, it was clear that the local Spar supermarket had some great discounts on. I approached the ticket office at the ground and found it to be closed, but a friendly voice told me that it was free to get in, and thank you for coming! I bought a drink and headed to the one stand which was open and at that point it hit me that there was no police and maybe 2 stewards. This was very relaxed, and nothing like the usual match day experience in Hungary. Around 3-400 hundred people, like me, had nothing better to do on a Wednesday night and it was quite an entertaining game, despite visitors MTK taking a two goal lead at the break, much to the delight of the 11 fans that made the short trip across town. Honvéd fans were vocal in their encouragement for the development squad on show and there were no groans for misplaced passes or hopeful efforts on goal. The talk in the stands was on who to keep an eye on, who is nowhere near match fit, and who needs to lay off the goulash, and as I left, I had that feeling you get when pre-season starts and you think, this is our year!

A short metro ride away is the Nepliget stop, in the heart of Ferencváros and right next to the stadium of Hungary’s most well-known team. Just in case you had forgotten that fact, the walls in the station are painted green, the colours of the football team. But, as I walked up the steps onto the stations concourse, a better reminder was right there. I was greeted by 10 riot police officers, some with dogs, and once I had reached the top of the stairs in all its glory was what seemed to be the entire city’s riot squad! My first thought was they must be expecting a big crowd, but then after seeing a supporter in a Jobbik (far right Hungarian political party) T-shirt dishing out leaflets to delighted Ferencváros fans, I remembered why the police are here. My last experience at this ground was not a bad one, due to me being in the press box, but as I soon found out, going as a “fan” has its own set of problems.

Earlier in the day I had to go to the ground and have my photo taken so I could be issued with a card to enable me to be able to buy tickets to watch Ferencváros. Nothing new to me after watching Luton throughout the 80’s, but as I was now on the database and a legit fan surely I would be treated as one? The stewards at Fradi are enormous lumps who would not look out of place on any episode of WWE wrestling and after searching me and trying to decide whether my Ventolin inhaler would be dangerous to take in, I was let through to the stands.

No free entry here tonight but I bought the cheapest ticket at 500 Forint (around £1.60) knowing that with just the one stand being used I could sit anywhere. Very wrong on my part. I had to sit in the correct section, with around 20 others in a crowd of around 6-700. So here’s where it started to go wrong. Ferencváros went two down within the first 7 minutes and then had a well taken free kick disallowed after being deemed to have not crossed the line (It clearly did). The fans became very nasty and I saw a guy run from the back of the stand to the front so he could launch a horrendous verbal attack on the linesman. All this was happening in front of children who didn’t look shocked, but rather joined in. The worst thing for me was the look on the seven or eight year old ball boys face, which I shall never forget. He went from having that look of being in awe at throwing the ball back to football players, to shock at what was being said in front of him. Luckily the guy moved back to his place in the stand. 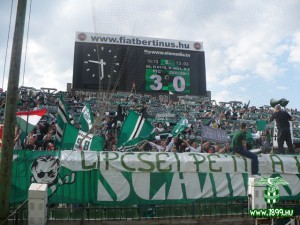 Ferencváros pulled it back to 1-2 with a fantastic goal and the atmosphere changed again. With loud vocal support for the team they believed were back in this game, but the away side quickly made it 3-1 and we were back to a cauldron of abuse at boiling point. Remember, this is a meaningless competition with many youth players, and the number 92 on one of the player’s shirts tells you all you need to know about the status of the players on show.

I know what you’re thinking, that the guy was an isolated incident and it happens at all football matches, but does it really? And would it really in the Johnston’s paint trophy between Carlisle and Wycombe? The problems I saw ran through generations. In front of me were a family of four with dad and three kids ranging from 7-14 years old. All of them saw abusing their team, officials and anyone interested in listening as normal. The old guy next to me with his wife was in his 50’s and he was probably the loudest in shouting abuse.

As the third goal against Ferencváros went in I cheered inside and left the ground at half time, unwilling to see what would happen after the match and as the metro train pulled out of Nepliget I sat quietly gathering my thoughts. This problem at Ferencváros is here to stay, with generation after generation being readied for what it means to be a Fradista. Passionate to the extreme.