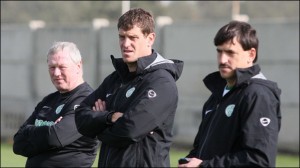 In February 2008, Kevin McCabe finalised a deal to take control of Hungarian giants Ferencvaros saving them from bankruptcy. Simon Peach recaps on the English invasion.

At one point, Sheffield Untied looked like one of the most forward-thinking clubs in English football. I know, I know, I can hear the collective cry of ‘huh?’ from here. They may have experienced a tumultuous few years that has taken them from the top flight to third tier, but the club made strides off the field by striking up affiliations with other clubs.

While such partnerships are nothing new, Sheffield Untied took things a step further five-and-a-half years ago when they purchased Chinese side Chengdu Five Bulls. “Part of it is to do with commercial reasons, trying to get further revenue generated from China,” said chairman Kevin McCabe with yuan symbols in his eyes. “Obviously international players that play for the club we’re buying just may have the potential to become first-team players here at Bramall Lane.”

The Sichuan-based club soon began playing under the moniker Chengdu Blades, whose fortunes change dramatically as they secured promotion to the top flight for the first time in the club’s history (albeit it was only founded in 1996).

Then, in early 2008, the Blades supremo went a step further and acquired Ferencváros – the most popular team in Hungary. Yes, Fradi had fallen on hard times but McCabe’s deal was somewhat of a coup. Lest we forget, the club have won no fewer than 28 Hungarian titles and 20 domestic cup wins, as well as finishing runner-up in the 1975 European Cup Winners’ Cup.

McCabe soon went about making his mark at the club, unveiling grand plans to develop the Stadion Albert Flórián that involved turning the ground 90 degrees. Furthermore, McCabe’s involvement saw a strong English contingent makes its way to the Budapest.

Former Guiseley boss Bobby Davison was appointed head coach of the then second division club and he soon brought in former Everton, Blackburn and Sheffield United defender Craig Short as his assistant. And under the pair’s tutorship, a heavily English-influenced Ferencváros won the 2008/09 crown with aplomb and a record point haul. Former Sheffield United striker Paul Shaw led the line in attack, while the side was peppered with several on-loan United academy players such as James Ashmore, Jordan Robertson and Liban Abdi.

But despite their success under Davison, Fradi struggled on their return to NBI and Short replaced his mentor in November 2009. “As a player, after reaching the age of 26, I always thought of moving abroad but I never expected to achieve this as a coach,” he said. “It all happened so quickly.”

Short took over with the team languishing 15th in the top flight but soon led a turnaround, bringing in several more players from England to add to the likes of United reserves Matthew Lowton and Sam Wedgbury. Former Port Vale and Colchester defender Sam Stockley was lured out of retirement to take up a player/coach role and Tommy Doherty, best known for his spells with Bristol City and Wycombe, soon followed suit.

Arguably the best of the bunch, though, was striker Anthony Elding, who had his contract at Crewe cancelled by mutual consent shortly before moving to Budapest. “Moving to Hungary could be a good move for him,” said legendary Alexandra boss Dario Gradi. “He’s a decent lad and I hope he does well out there.”

Elding’s career had looked in freefall when he joined Fradi but he found a new lease of life under Short. Following a high-profile move to Leeds in 2008, the striker failed to live up to expectations and was soon sold to Crewe, who subsequently farmed him out on loan to Lincoln and Kettering after netting just once in 26 appearances. It had looked like a life in non-league beckoned but Elding made a move unusual to many British players by following some of his countrymen to Budapest.

The deal worked wonder and under Short’s tutorship the Boston-born striker blossomed, scoring six goals in his first seven matches for the club. “Craig Short is definitely the best manager I’ve worked with during my career,” said the striker. “He is a very straight person; if you’re honest with him, he is honest with you. That is the way it works.

“Our aim is to reach a European cup, but it seems to be more and more difficult this season,” he added. “We will obviously make every effort to play at least in the UEFA Europa League, if not this autumn then next year.
“In the long term, Ferencváros have to be involved in European football; no doubt about that.”

When I met Elding at the Stadion Albert Flórián in April 2010, he seemed delighted with the way things were going in Hungary in his own dour way. Stockley strutted around the turf with a huge smile on his face donning a garish t-shirt, while Short pronounced to me his delight with life in Budapest.

However, just a few months later the English connection began to unravel. After helping Ferencváros finish seventh, Short was named surprise appointment of recently-promoted League One outfit Notts County. The manager was soon followed out the door by Elding and Doherty, who moved onto Rochdale and Bradford respectively. Stockley joined non-league AFC Telford in January and now the only links remain with England are former Blades midfielder Abdi (who is set to leave after a fallout with current manager Laszlo Prukner) and vice-captain Dénes Rósa, who endured a fruitless spell with Wolves.

McCabe too looks set to leave the club after publishing an advert on Soccerex seeking an ‘investor’.”When I took control in 2007 it was always with the intention of returning the club to Hungary,” he said. “Regrettably during most of 2010 many discussions and presentations held with potential Hungarian investors introduced to me have not led to any proposal being made.”

Furthermore, McCabe did not rule out relinquishing his stake in the club and said any associated club-owned property came as well as the club.

For many it has been quite an abrupt end to the English connections at the club. No longer does Sheffield United offer a link to Ferencváros on it’s official website, nor does it publish reports on the goings on in Budapest.
Gone are the English players, staff and coaches, with the club now a wholly-looking Hungarian operation with a smattering of players from South America and Eastern Europe nations.

Perhaps that was the plan all a long, perhaps not. One thing is for sure, though, the English revolution will live long in the memory of the country’s most famous club.